Being a woman in society seems like one of the hardest things to be nowadays. Between sexual harassment, sexual assault and men immediately thinking that women “owe them something” for simply being kind or nice to them – it’s a bit f*cking ridiculous. That’s why when men’s egos get bruised after rejection from a woman they’ve been pursuing, they had to come up with a term for it to blame the woman entirely – just because, you know, we’re not allowed to just not be interested in someone. The “friend zone” is a place where many men find themselves living after being kind, nice and sweet to a woman they are friends with and expecting much more – like sex – but being sadly turned away. Boo hoo, cry me a f*cking river. Just because you’re nice to me, doesn’t mean I owe you penetration.

when people complain about being in the "friendzone" this is what they actually mean pic.twitter.com/THGB06xcau

So if a woman says yes they’re a slut but if they say no they’ve put the guy in the friend zone??? I do not understand male logic 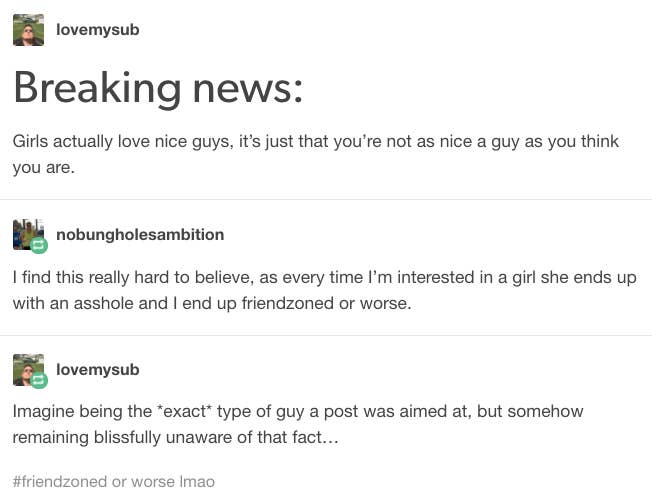