Twitter users were a bit confused after hearing Taylor Swift thought 2017 “couldn’t have been a better year,” seeing as so much as gone down to destroy everyday people.

Taylor Swift reflects on 2017: "I couldn't have asked for a better year." https://t.co/m1tKqWJLhx pic.twitter.com/FvWH28vH7O

And, they sought out to remind her just how bad it was.

I mean, yeah there were Nazi's and white supremacy marches, and families are being town apart, and there were mass shootings, and people are losing health care, but none of that affects me, so 2017 was great!

remember when the president of the united states imposed a travel ban https://t.co/ioghsFbQJw 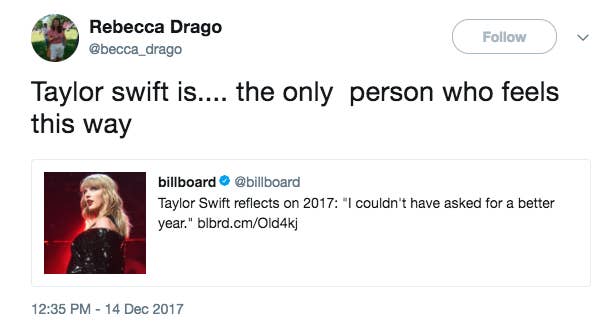 Sorry Taylor, but when you’re an influencer, you’re supposed to have a stronger voice. No thanks, sis. Moving on.