Here is fair warning, folks! Anyone for whatever reason that has not watched “Stranger Things 2” this post is going to be filled with some spoilers. I gave you guys the heads up so you can’t get mad at me. Serious question though what could you have possibly been doing all this time? It’s been on Netflix since October 27, I can’t imagine you have much more important things to do. Might as well hop on the “Strangers Things 2” bandwagon. Is it really too much to ask that you go treat yo’ self to some binge-watching? Go watch it, like right now!

Now, let get into what an extremely observant “Stranger Things” viewer had spotted. It all begins with our good friend Chief Hopper. Anyone remember the flashbacks to Hopper’s family pre-Demogorgon days? The flashbacks are from Season 1 where Chief Hopper is reminiscing on presumably the happiest days of his life, with his family. Now there are a lot of questions related to Hopper’s daughter and her unfortunate death. Many fans speculate she too, may have had special abilities similar to Eleven. Think back to Hopper’s first flashback to his daughter Sara having a panic attack.

Some fans believe she may just be experiencing some horrifying visions that no one else seems to see. Sound familiar? As interesting as that sounds it is here nor there. We’re not here to discuss potential fan theories no matter how exciting they may be. This is about the unbelievable detail that goes into the making of this amazing show. The meticulous detail taken by the writers are pretty incredible. As proof here is a sad little easter egg even the most diehard fans may have missed. 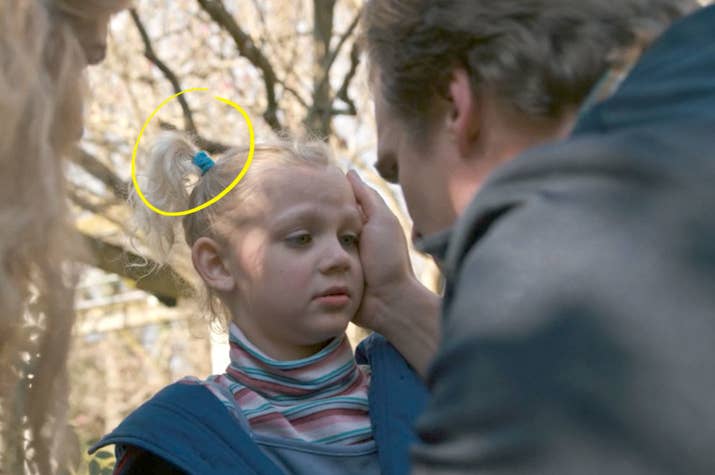 Boom! Just a blue hair tie right? WRONG! In a T.V. show or movie, things are almost never placed in a shot just because. Every single inch of the frame being filmed is designed and mapped out. Now, you may be asking yourself what’s the significance here? It’s just a memory of Hopper’s daughter Sara before she passed away. If you’re a little lost don’t worry here is where things get interesting. Let’s fast forward things a little bit to when Sara is in the hospital battling cancer, even though many fans believe it could be more than cancer. 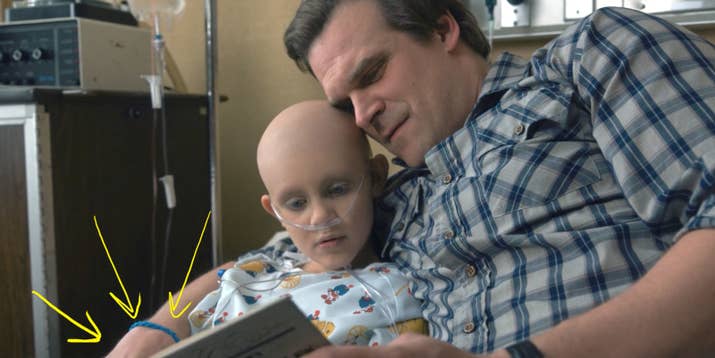 The hair tie is now being used as a bracelet for Chief Hopper. It’s a pretty touching little detail to keep the Chief’s daughter Sara somewhat relevant while at the same time showing Hopper has a bigger heart than we thought at this point. The bracelet continues to pop up at the present time during “Stranger Things” which shows Hopper is obviously still hurting after his daughter passed away. It also shows how much the bracelet means to him after all this time. 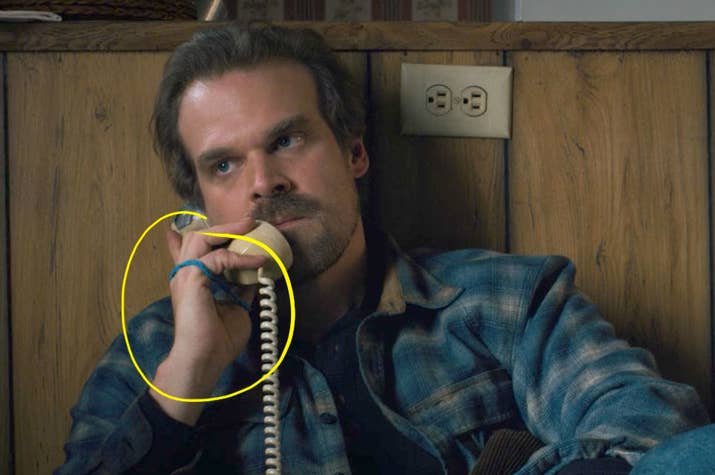 The bracelet can be spotted all throughout the first Season. This is where eyes might start getting a little watery. Also, one last chance to turn back, spoilers are on their way. Throughout Season 2 Hopper and Eleven have a complicated relationship, at best. It can’t be easy being locked away in a crappy little house and constantly lied to. It also is probably fairly difficult to raise an angry impulsive young girl with crazy superpowers. I have sympathy for both sides. Eventually, we know Hopper and Eleven eventually have their bond grow even stronger even leading to the Chief adopting Eleven as his own.

Now that Eleven is technically Hopper’s new daughter it’s going to be very interesting to see where “Stranger Things 3” goes. Now, Hopper obviously still broken up about his lost daughter has Eleven to look after, maybe this can help him move forward from his tragic loss. Eagle-eyed fans believe it’s already beginning to do so. They point to the nice little accessory Eleven is rocking in the newest season. 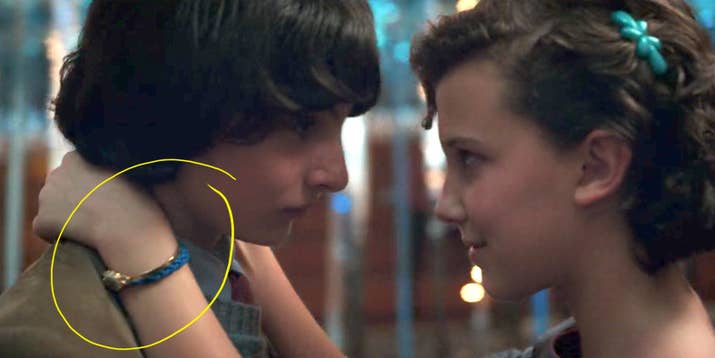 How touching is this? When we fast forward to Season 2 during the Snow Ball you may notice something on Eleven’s wrist. It would seem that old Chief Hopper decided to give Eleven his daughter Sara’s hair tie that he’s had on all this time. I mean this is obviously a significant gesture from Hopper, sharing a small piece of his daughter with Eleven. Hopper’s not replacing Sara but it’s sweet to think that he’s sharing such a huge part of his life with his new adopted daughter. Hopefully, this helps Chief Hopper move onto Season 3 happier than ever. I doubt Eleven will get any use out of it as an actual hair tie but the amount of detail and planning that goes into “Stranger Things” has blown me away once again.