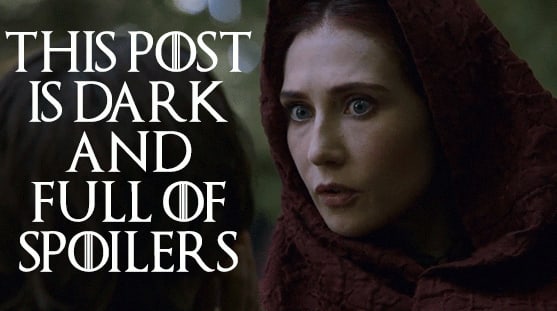 Last week’s Game Of Thrones was less eventful than it’s predecessors in terms of big battles, epic reunions, and savage old-lady takedowns — but it was actually one of the most eventful episodes in terms of clues and subtle revelations. (See Gilly and Sams “annulment” scene.)

One of the best moments in the episode was when Dany and Drogon, fresh off their epic and catastrophic Loot Train attack, landed in front of Jon Snow. Drogon, like a stranger’s dog, tentatively walked up to Jon, and sniffed him out. Jon, showing the confidence of someone who’s actually standing in front of a green puppet instead of a real dragon, reaches out his hand and pets the vicious beast.

Of course, this moment is another in a long series of clues about Jon Snow’s parentage and secret Targaryen roots, but it’s also revived a controversial theory about none other than Tyrion Lannister.

The short version is: Tyrion might be a Targaryen, not a Lannister. It basically comes down to the fact that Aerys Targaryen (the Mad King) may have raped or otherwise slept with Joanna Lannister; Tywin Lannister’s wife. Meaning that Tyrion may actually be a bastard son of the Mad King and not Tywin.

There are lots of clues in the books about this, not the least of which is Tywin’s seemingly inexplicable hatred for Tyrion. His hair and eye color are also in play. But some fans believe that the scene between Jon Snow and Drogon last week all but confirms the theory.

Basically, if Jon Snow was able to touch Drogon soley because he’s a Targaryen, that means anyone else who could touch one of Dany’s dragons would also have to be a Targaryen. In the season 6 episode “Home,” Tyrion touches one of the dragons in locked away in Meereen before freeing both of them. Tyrion Targaryen confirmed?

Now look, it’s not an airtight theory, and it’s possible that Tyrion was able to get close to the dragons because he wasn’t a threat and can talk his way out of anything. It’s also possible that the dragons did kill him and everything that’s happened in the series afterward has been Lord Vary’s fever dream. This is Game of Thrones we’re talking about.

As the series wraps up however, it’s only a matter of time before long-pontificated theories like this get confirmed or busted.