You know that feeling you get when you go to see someone you know’s social media profile and realize they’re not friends with you or following you? You definitely feel kind of sh*tty and rejected, especially if you know the same people and have hung out from time to time. It seems as though everyone goes through this at one point or another, even celebs. Recently Lindsay Lohan felt a bit crappy and rejected when she found out that the goddess Jennifer Lopez doesn’t follow her on Twitter. Ouch.

To be honest, I don’t see why Lopez would follow her on Twitter – you know unless they’re secret friends or something. I just never thought they would be hanging out in the same circle of people, but, you never know with celebs, they always catch you off guard and surprise you with who they know/date/hang with. Lohan has been known to hit up a lot of celebs on Twitter trying to hang out or talk – seeing as she had a hard fall out of the spotlight when she got pretty deep into her drug problems. This time, she tried to reach out to J.Lo to hook up in Dubai while Lopez would be there for work.

Lopez tweeted out that she’d be doing a show in Dubai and Lohan said she wanted to DM her about getting together while she was there – but couldn’t DM her because J.Lo doesn’t follow her. Double ouch. 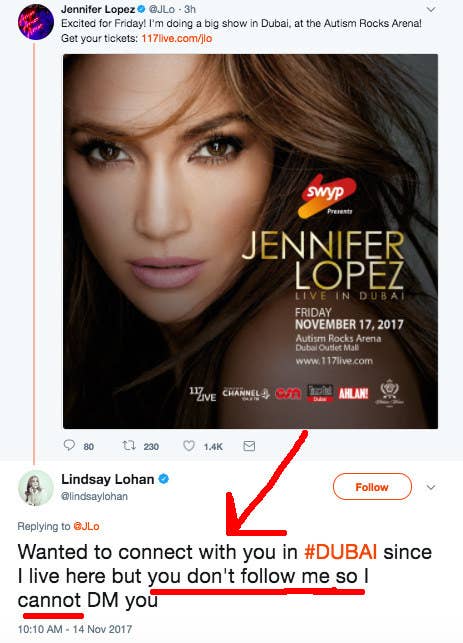 Of course, people on Twitter were stirring the pot like a fine vat of soup because who doesn’t love some girl-on-girl celeb drama? *brews tea*.

sweetie no one wants to connect with that

Do you know her ? pic.twitter.com/yA1rxJ4Tru

I think Jlo is fine with no connection darling.

Girl are you ok?

I don't think she cares hun

That's shady…Not even Slim Shady was that heartless

Wtf would she want to link up with your crazy ass

This is very Gretchen Weiners of you, Cady Heron.