For months now, the drama between Caitlyn Jenner and the entire Kardashian side of the family has been pretty intense. During interviews, many of the Kardashian sisters avoid talking about Caitlyn. During shoots, they don’t discuss her new life or her new business, unless it is to say that she’s a complete backstabber that threw their entire family under the bus. And, if you ask Kris Jenner about it, well, prepare for a brutal takedown.

It seems as though Caitlyn Jenner and her family have cut ties after a lot of drama came about in response to her memoir that was released in April of this year. On this season of “Keeping Up with the Kardashians,” Kim, Kourtney and Khloé are all open about how they feel about Caitlyn and how they feel she has sold out their side of the family in order to profit from her new “book and life.”

Caitlyn has been known to stir the pot in interviews and such, as she really doesn’t have as much “publicity” training as the girls do in their own lives. She also didn’t encounter this much spotlight when she was Bruce Jenner married to Kris, other than the reality TV show. Now, she appears more often advocating for LGBTQ rights and promoting her own business, so she’s speaking more often in the spotlight, according to Kim.

Kim even had to call Caitlyn and make sure she didn’t say anything about her daughter, Kendall Jenner, and her Pepsi advertisement that completely went south earlier this year. She told her to “avoid” speaking about it, but instead, put her foot in her mouth and embarrassed Kendall altogether – which, she tends to do more often than not.

According to the Kardashians, Caitlyn has been shady and has “lied” about her motives in her new business opportunities. They claim that Caitlyn sent over a copy of her book to Kris and Kim to approve – but, parts of the book were “omitted” and she then included jabs to their biological father and also to the entire family in the published version. 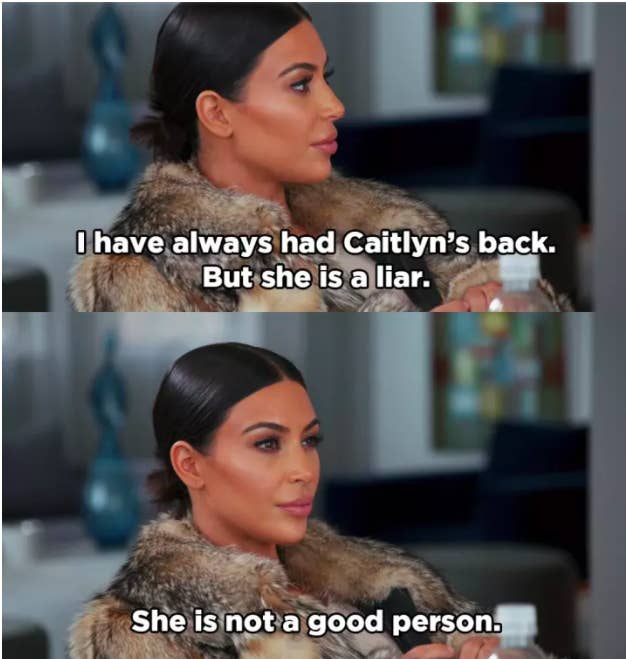 In her novel, Caitlyn does throw Robert Kardashian Sr. under the bus, saying he “knew O.J. Simpson was guilty of murder and represented him anyway.” She also claimed that the only reason E! signed on to do “Keeping Up with the Kardashians” was because of Bruce Jenner’s fame. She claimed Kris Jenner “knew about her gender dysphoria” for years and tried “negotiating terms” as though it were a business deal in order for them to remain together. She also claims that the entire family was “angry with her” because she didn’t choose to include them in the Diane Sawyer interview – for reasons, she explains, having to do with their “sensationalism” and the desire to not want to make it a “publicity stunt.”