Spoilers for Game of Thrones season 7 below!

With one more episode in the books, Game of Thrones fans have yet another week to pontificate, analyze, and theorize absolutely every detail they’ve seen so far. Fans, forums and office chair detectives have already picked out key easter eggs and debated their meaning and/or implications.

This theory comes from the trailer for the upcoming season 7 episode 6, and it points to a death that would be pretty dang devastating.

Did you catch it? If not, you may want to sit down.

About 30 seconds into the trailer you can see The Hound smashing a wight’s head. Nothing unusual there. Except — look at the weapon he’s using.

That appears to be Gendry’s hammer. It was introduced as Gendry’s weapon of choice in last night’s episode. Remember he used it in that fermented crab scene that went on for about 37 minutes?

So how did The Hound get Gendry’s hammer? Some kind of epic mid-fight weapon swap? Unfortunately, some believe that the hammer-wielding comes after Gendry’s death. His untimely death, I should say. As he was just reintroduced after 4 seasons of absence from the show.

Later in the trailer, Gendry is seen with his hammer engaging wights in battle. So we know he at least gets to see some action before he dies. If he dies. 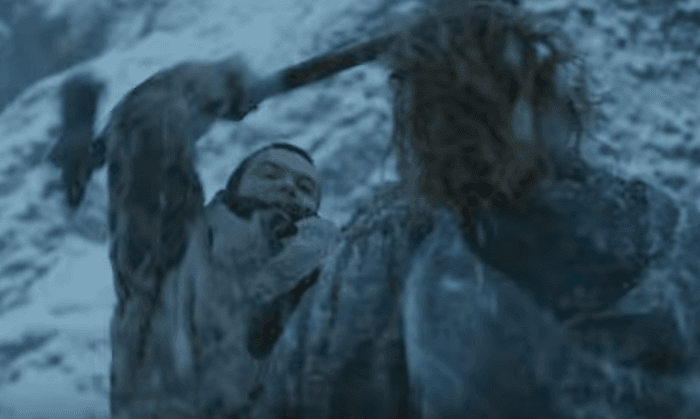 Either way, it’s good to have Gendry back, even if it’s just for half an episode. Of course, this is all speculation and it could just be that Gendry lets The Hound take his hammer for a spin while he takes a mimosa break.

Or maybe The Hound has a hammer of his own? He seems like a hammer guy.

Either way, next week’s episode will bring us one closer to the series’ end, and it’s almost a guarantee that not everyone we like will survive. Plus, the show that’s famous for killing beloved characters hasn’t really done that in a while so… we’re scarily due for one.

Like Elaria locked in a cage with her poisoned daughter, we’ll just have to wait and see what happens.