On Friday, February 8, there was a hole torn through the social media space time continuum by Twitter account @wwwdotyoutube. The caption—an unassuming “found a new guy”—could in no way have prepared any of us for the screenshots attached to the post.

The images are screenshots of posts by the dude running the Instagram account @hardrocknick, and…well, the best way to describe them is this Chrissy Teigen tweet:

this is, and I am not just saying this, the best thread I have ever had the honor of reading

The captions under each of Nick’s photos—usually a pursed-lip selfie—are what can only be described as individual works of art. It’s as though he painstakingly plucked the worst possible characteristics from the douchiest, least self-aware humans (men) alive, and bestowed them upon himself.

Each post gets more and more absurd and it’s difficult to believe this isn’t a total hoax. (If it is, Chrissy Teigen HERSELF fell for it.)

Here, hardrocknick negs the sh*t out of any ladies even considering making him their ex-boyfriend.

His colored brows and eyelash extensions are also unusual. Not because he’s a man, but because he claims to hate them. (Also, he’s a Trump supporter.)

In fact, this summary is a nearly-comprehensive bio of hardrocknick’s life. He wants you to know he’s rich, tattooed, and received at least one Amazon package a week.

He also wants any interested parties to know he’s packin’.

OP continued adding @hardrocknick posts to the thread. Here’s one where he appears to have found a (high-school senior) girlfriend who…isn’t allowed to eat french fries?:

Here’s another, where he offers the plebes of Instagram a look into the breakfast of  “a man with $75 million cash.”

“This is at a diner. there are jelly packets,” OP points out.

At this point, @wwwdotyoutube switches gears to @hardrocknick’s Facebook. It turns out our dude’s name is Nicholas Rock Johannsen, he is as racist as he is misogynistic, and he appears to be looking for a girlfriend again.

(Though, granted, the chronology of this is unconfirmed. Johannsen may still very well be seeing his fry-averse teenage girlfriend.)

In a subsequent Facebook post, Johannsen breaks down his “10 TURNS OFFS IN A WOMAN IN ORDER OF LEVEL OF TURNOFFEDNESS.”

(Honestly, I’m with him on that last one. But #4 is a bit much coming from a man in lipstick.)

Johannsen got a bite from one Ms. Warren. This is their rollercoaster of an exchange:

OP’s Twitter thread about Johannsen racked up nearly 40,000 likes in three days’ time, prompting many to search out the human enigma themselves, and to share their findings with the class.

My personal favorite is this video where Nick proves he has good credit:

This one is for the haters. 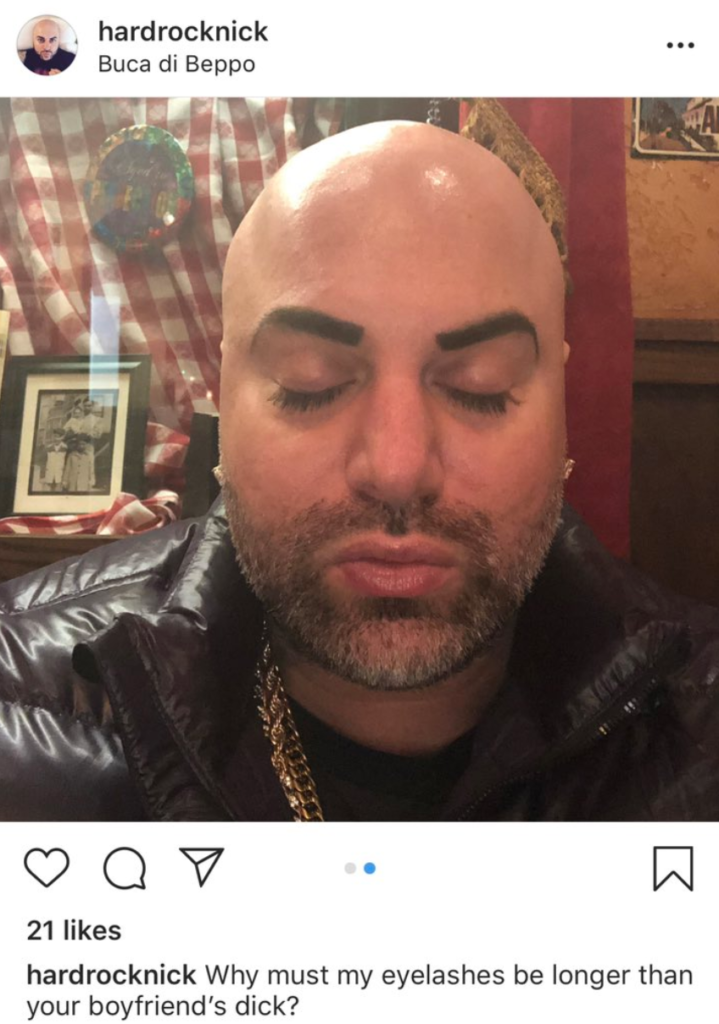 Also, EVERYTHING ABOUT THIS:

He was married to a woman who was previously Jeff Goldblum's fiance, but she cheated on him with an insurance agent once their pet grooming franchise started failing, so he broke into her house and shit in her sink. All of this info is available in actuals lawsuits.

This dude is legendary in the SA goon FB groups, we freaked when we found these docs.

After learning there was a viral Twitter thread making fun of him, @hardrocknick posted several Instagram DMs from supportive “fans.”

I GOT THE BEST FANS ON THE GRAM! Mad love to every last one of you, even the haters! Honestly, these aren’t even the best DM’s showing me hardcore love but its what rolled in the last 5 minutes. My fans cant sleep unless they check my social media, huh? We blowing up in 2019, huh? Don’t believe all the lies you read out there on burner Twitter accounts, Reddit, fake Instagram pages posing as me. They hate to see a white boy shine hard as hell, floss in $200 Nikes, sleep on imported velvet, fuck Hollywood actresses and come through in a 2020 Mercedes Benz on auto pilot! Fuck em all!

THEY SEE THROUGH YOUR INSECURITIES. Keep blowing me up! Jealous ass losers. People love me on the Gram.

I LOVE YOU GUYS JUST THE SAME!!!

This did nothing to stop the flood of questions, comments, and concerns on Twitter.

who the fuck is his brow person

“I Alexa’ed the shit out of my house”

Oh neat, you managed to conveniently bug your house for the NSA. I’ll be right over.

I started following him on Instagram. It’s absolutely one of the dumbest rabbit holes I’ve ever gone down. Thank you

To all the haters saying he’s not actually rich: pic.twitter.com/AtrJKhgWiZ

I like this one where he calls Shake Shack a “yummy local burger joint”. pic.twitter.com/FiB3IUN3eL

Do you think the “one amazon package a week”’is a prime subscribe & save deal for toilet paper?

This is an entirely new powerful genre of online guy

This man has one plate pic.twitter.com/3lYrzcwPbB

He refers to his mom as his private chef.

Ladies, if a racist and misogynistic naughty biblical king is your speed, hit Nick up. And remember to  #pleaseusedialsoap.