We’ve all gone on a date or two that didn’t end up working out in the long run. Hey, it happens. But, when we go out with someone that we feel we hit it off with and it ends up not working out, we tend to feel bitter and salty AF. In reality, no one likes being rejected. When you throw dating apps like Tinder into the equation, well, it’s easy to feel like we’re being simply “used” for something – but, that is, if you actually were used for something. If you’re hitting it off with someone online and it doesn’t work out after you meet in person – it happens. But, if you sleep with someone you met online and then they say it’s not going to work out, it’s a whole different problem. One woman felt so “betrayed” when her Tinder date didn’t work out that she went on the most savage, brutal and salty text rant I have seen to date – it ain’t pretty.

Here’s a little backstory for y’all to sip your tea with – this guy went out with this girl on Tinder and basically wasn’t into it. He apparently thought this girl was clingy AF and wasn’t down with all the texting and sh*t (homegirl, you should know better than to send the “ok don’t worry about replying” text, it’s stage five clinger handbook). Anyway, he posted this wonderfully crafted rant he received from said date onto Imgur saying:

Messing around on Tinder for a bit of distraction during a crazy stretch at work. Match with this woman. Texted a little bit. Probably should’ve seen a few red flags (e.g., sending a 7:00 a.m. chasing text the next day because hers was the last message in the text chain from the night before, and I hadn’t yet responded), but I like to give people the benefit of the doubt–particularly over text, as things can come across in ways other than as intended.

Anyway, we make plans to meet up for an afternoon drink over the weekend. Had a little walk through the local park, a couple of pints at a nearby pub, nice conversation, etc. (Again, probably should’ve picked up on a few signs, but she was clearly a bit nervous and–again–benefit of the doubt. And we had a nice talk and a nice time.) A quick goodbye kiss on the sidewalk at the end, but nothing more.

She started texting afterwards, and–apparently–wasn’t pleased with the speed of some of my responses. (Was a busy weekend.) After a couple of further chasing texts–the last one of which was pretty snarky–it was clear to me that this wasn’t going to work. (Insecurity, for me, is THE deal-breaker.) But we’d had a nice time, and she seemed like a nice woman, so I decided to send her a message explaining that I didn’t think it was going to work and wishing her the best. The next morning, I woke up to this absolutely epic text rant. 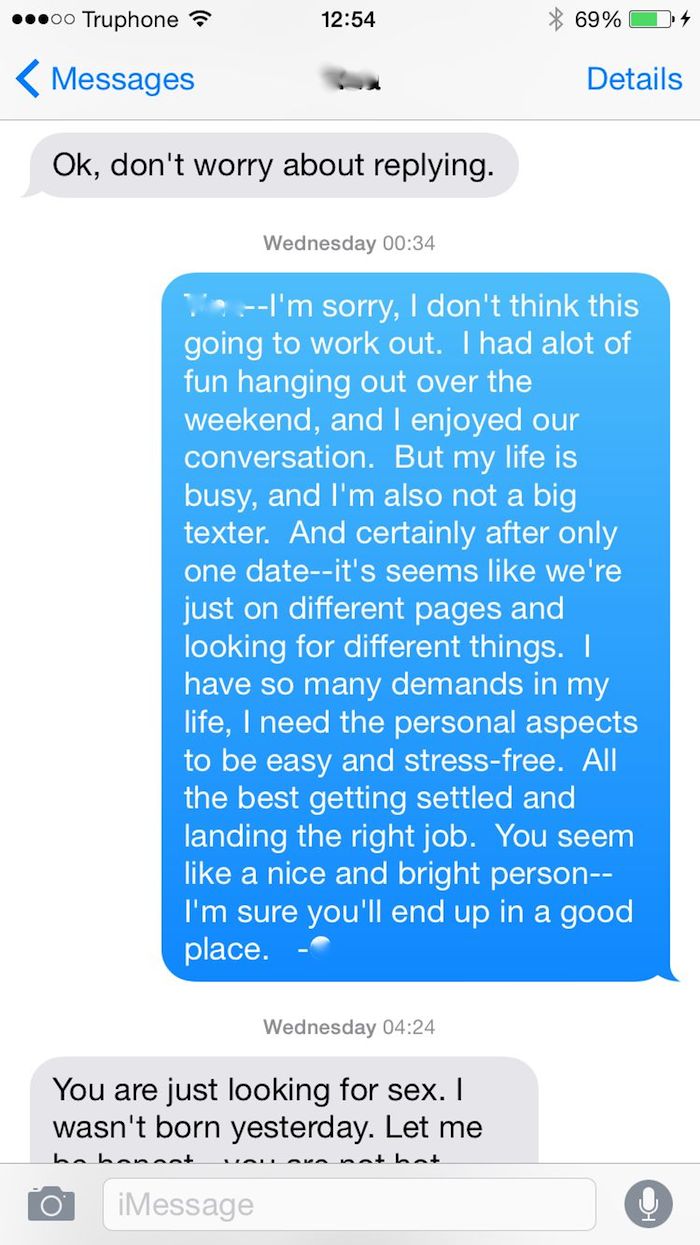