It’s hard to navigate what to do when a parent asks you to help you out with their kids, but the thing they want you to do seems like bad parenting. That’s what happened to u/anonaunt who posted her story on r/AmItheA**hole, asking, “AITA for refusing to change out of my bikini to save my niece’s feelings?”

The OP says she spent some of quarantine cleaning out her closets and the result was having only one bathing suit left, a bikini. When lockdown lifted, she and her husband decided to have a small BBQ with family at their place. Her sister-in-law was there as was her nine-year-old niece:

So we’re all in the backyard BBQing and getting ready to swim. I change into my swimwear and come outside and start applying sunscreen. SIL rushes over to me and pulls me aside and asks that I cover up or change into something less revealing like a 1-piece as niece has been sensitive lately and dealing with some body image issues regarding feeling fat (she’s not). I tell her that regrettably this is the only swimsuit I have anymore due to cleaning out my closet and I plan on swimming as it was sweltering hot, but after my sunscreen dries i’d be happy to throw something on over my swimsuit until i’m actually in the water. 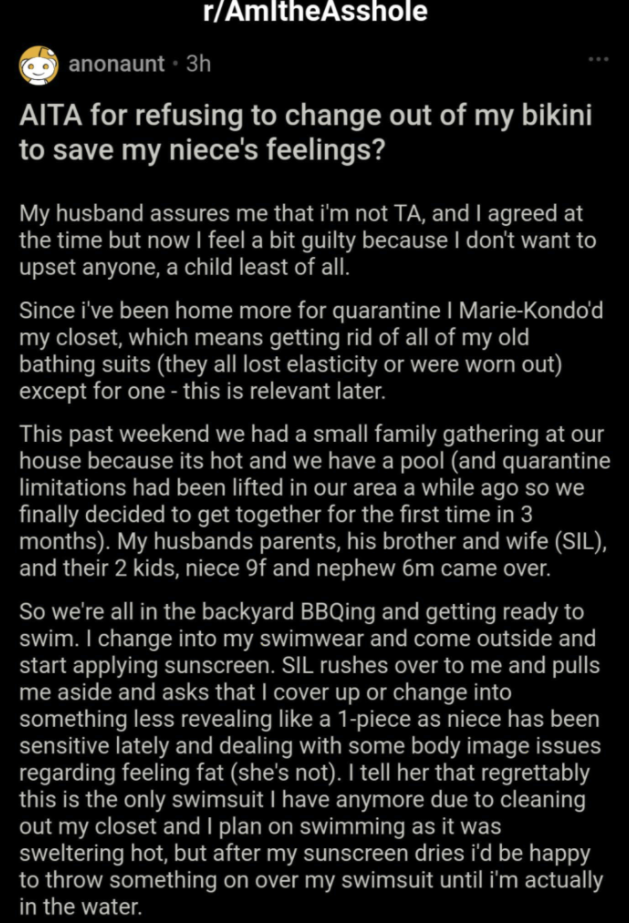 The OP says her SIL responded by asking her to go inside the house until the sunscreen soaked in, but she refused:

I’m not going to hide in my home for 30+ mins while we have company over that we haven’t seen in 3 months. SIL says it will hurt niece to see me in a 2-piece because of my “unrealistic body image”. I tell her there’s nothing unrealistic about me because i’m a real person so I don’t even know what that means, and i’m sure niece will be fine for only 30 mins. I also said that while I sympathize with body image issues as i’ve dealt with them in the past myself, it’s probably not helping to just shelter her from seeing people’s bodies and maybe work on body positivity instead. She says I don’t understand because I don’t have kids. So I sit in the shade to apply sunscreen and let it soak in and she takes niece inside for over half an hour before coming back out.

I don’t know if i’m in the wrong here, maybe I could have just gone inside for a while to spare my niece’s feelings but at the same time I feel like I shouldn’t have to hide my body – and at my own house for that matter. And it was just a 2-piece, it wasn’t like really booby or revealing – the top was high-cut kinda like a sports bra and the bottoms were normal bikini cut, they weren’t like a thong bottom or anything. 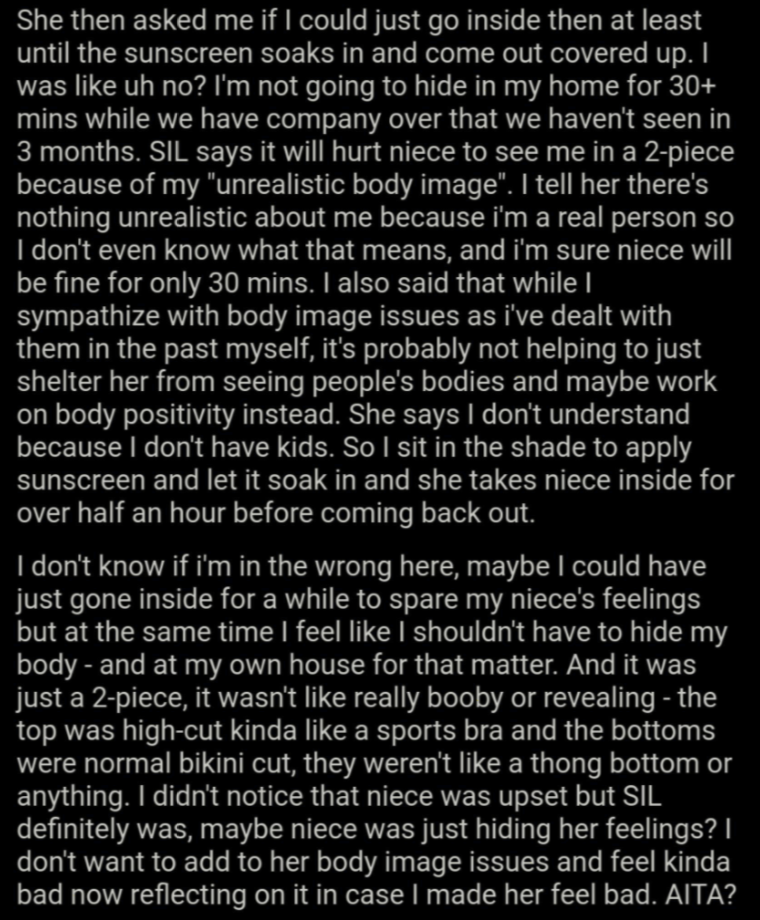 She added that she didn’t notice her niece being upset but her SIL definitely was, so she wondered if her niece was hiding her real feelings. While she felt she was in the right at the time, as she’s reflected on it, she’s wondered if she was actually contributing to her niece’s body image issues.

Almost everyone supported the OP’s original decision. Her bod isn’t “unrealistic” for one. Unless she’s hiding story details, her body isn’t augmented or “fake” in some way. Body positivity means accepting all sorts of bodies, even ones considered conventionally attractive. Trying to hide other types of bodies from your kids isn’t really teaching them anything healthy about themselves or the world.

Some people also suggested it might really be the SIL who had a problem, not the niece: 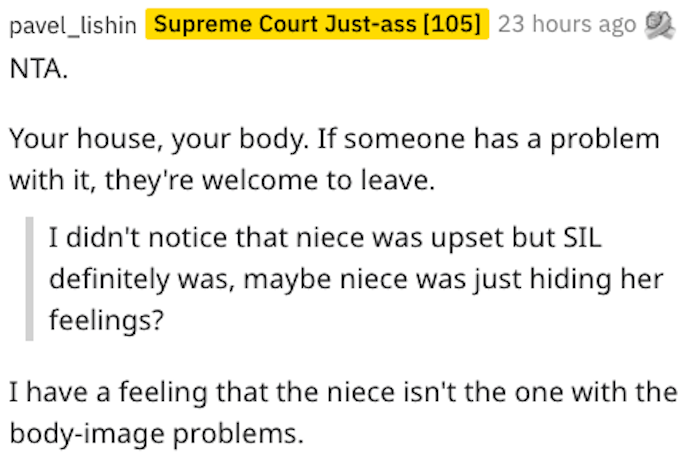 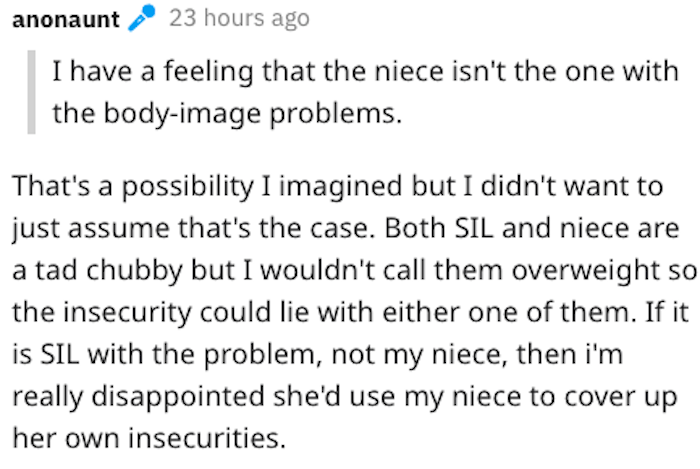 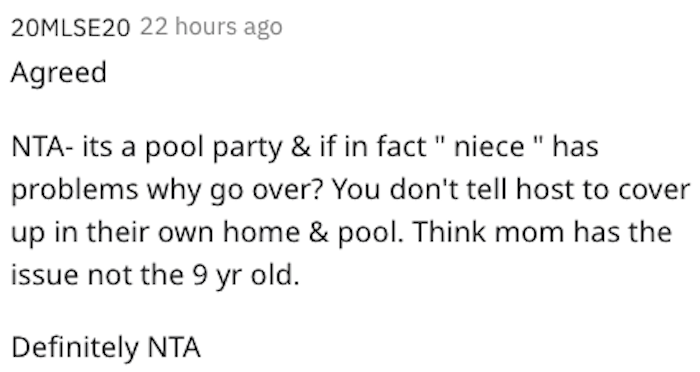 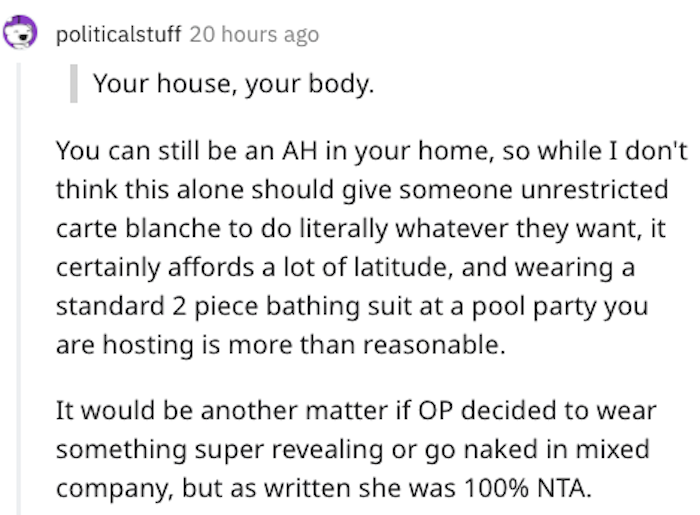 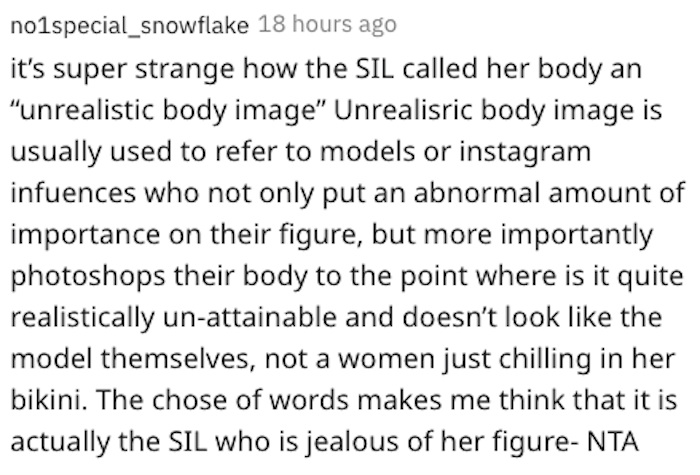 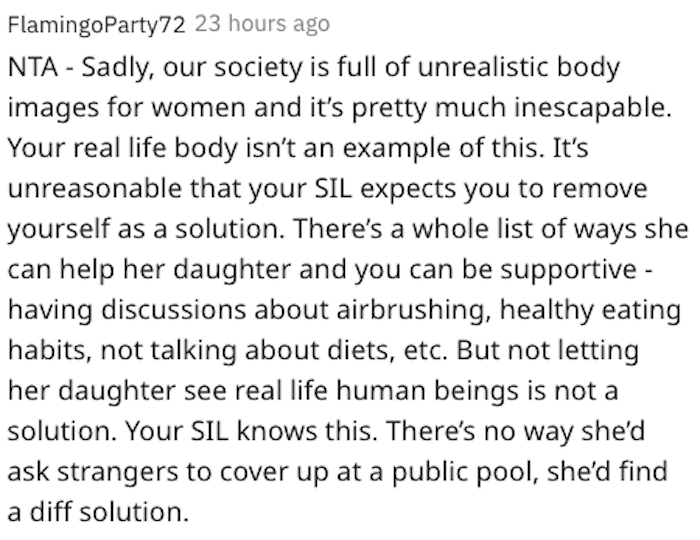 The OP eventually stepped in to say that she was surprised by how hard people were coming down on her SIL, who she believes is generally a good person and a good mom. It’s also entirely possible to her that a nine-year-old would be insecure, because the world is designed to make little girls insecure: 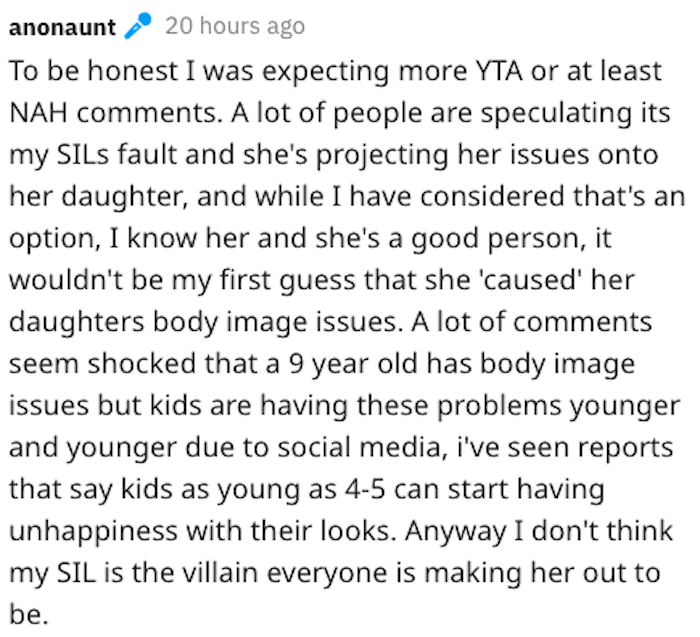