Season 8, Episode 4 of Game of Thrones brought us back to the true battle that we’ve been waiting 8 long seasons for. After defeating the Army of the Dead and the Night King, Daenerys and Cersei are about to face off in the final two episodes #ForTheThrone.

Cersei, despite Tyrion trying to get her to surrender, proved to still be the same horrifying monster she’s always been and killed Missandei. Undoubtedly pregnant, she also told Euron Greyjoy that the baby is his—although she had previously told her twin-brother/lover, Jaime Lannister, that the baby was also his.

Meanwhile, ‘The Last Of The Starks’ proved to be a rough episode for Dany. She admitted, finally, that the North would never support her the way they do Jon, and therefore begged Jon to keep thefact that he’s a Targaryen a secret from everyone he knows and loves. She knows that if people found out that Jon’s the true heir to the Iron Throne, they would support him over her and her entire journey would be for nothing.

Jon doesn’t want the throne, he’s said it several times throughout the show. But, Dany was quick to point out he also did not want to be King in the North and was still made King regardless of his wants. After a few minutes in the episode, Jon already betrays Dany and tells Arya and Sansa the truth behind his heritage with the help of his “brother,” Bran.

After Sansa opened her big ol’ mouth and told Tyrion about Jon’s true parents, Tyrion goes off to tell Varys that we may have more than one battle for the Iron Throne. Varys, then, points out that Daenerys is acting much like her father, the Mad King. He compared Dany to a tyrant, forcing herself into power.

As one fan pointed out, watching her best friend Missandei and her ‘son’ (dragon) Rhaegal get brutally murdered within a span of several hours may just have pushed Mad Queen Dany over the edge—which, means trouble.

You know what time it is pic.twitter.com/LdK2LXDrDR

Does anyone else feel like the close ups of Daenerys in this episode were designed to remind us that Dany has Green eyes? ‘Brown eyes, Green eyes, Blue eyes.’ Arya will stop the Kings Landing massacre, but which green eyed queen will she kill? #GamefThrones pic.twitter.com/BuSNfgc6D4

Though Dany’s character in the GoT books has the violet eyes of a Targaryen (interestingly enough, Jon Snow also has one violet eye in the books), this closeup wide shot of Season 8, Episode 4, reveals that Dany’s eyes are, in fact, green.

And, if you recall Melisandra’s prophecy about Arya “shutting forever…brown eyes, blue eyes, and green eyes,” the significance of Dany’s eye color takes on a greater meaning. 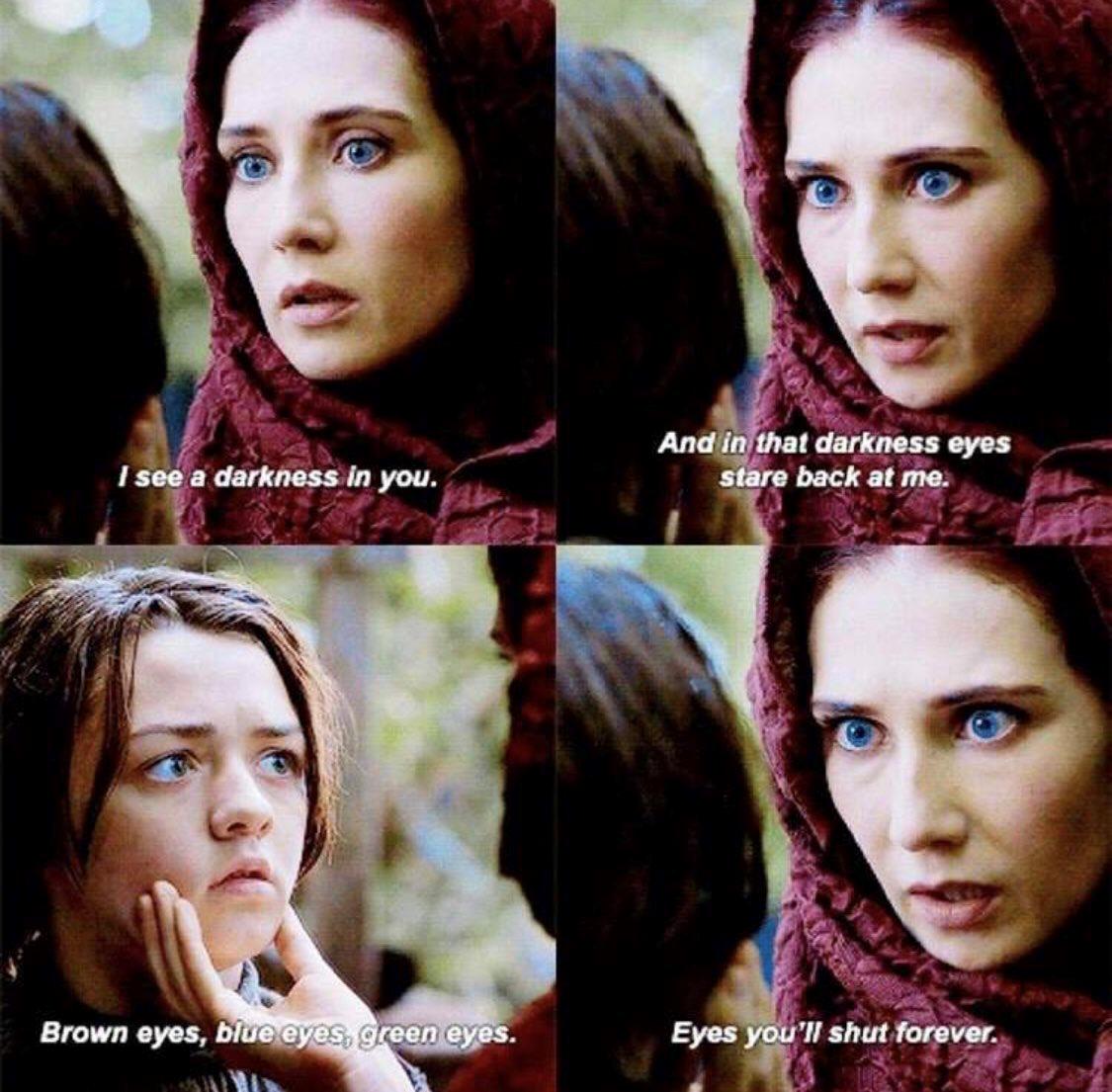 After Melisandre repeated her prophecy in “The Long Night,” many people automatically assumed that Arya would be off to King’s Landing to kill Cersei. But, seeing as both Daenerys and Cersei have green eyes, it’s truly a toss-up on who she would kill first. Cersei has been on the top of Arya’s list for years, but, at the same time she protects Jon as her true brother—and, if Dany tries going after Jon, Arya will most definitely step in.

Unless, of course, the “green eyes” will be Sansa for some totally messed up reason.

Sansa has green eyes too. With #gameofthrones you just never know. I don’t trust those writers. Arya killing the queen is too obvious right now pic.twitter.com/SkOXqkmIOj

God, we certainly hope not.