As you probably know, a white nationalist rally was held in Charlottesville, Virginia on August 11th 2017. It would eventually turn violent — with a man ramming his car into counter-protestors — killing one and injuring dozens. Two police officers also lost their lives in a helicopter crash.

If you're just waking up and missed it, torch wielding white nationalists marched on a church in Charlottesville VA last night. pic.twitter.com/ATnNb7Kp8k

While there’s pretty much nothing funny about white supremacists holding a violent rally, or an act of domestic terrorism, there was something kind of funny about the protestors’ luminary tool of choice. 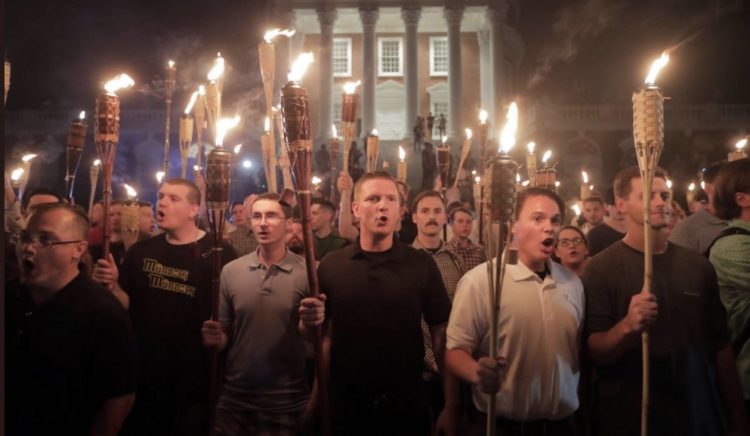 Yes, the tiki torch. Because nothing says “I’m white and I demand to be taken seriously” quite like carrying a tiki torch at a white nationalist rally. Because even the presence of a mosquito would be too diverse for their fragile brains to handle. Because their brand of white supremacy is so antiquated and pathetic it can be furnished entirely by Pier 1 Imports.

Anyway… even though carrying a tiki torch was the least-stupid and harmful thing these kids did over the weekend, it was the funniest. So lets all just sit back and enjoy these a**hole f**kstick pieces of horse s*** get roasted over and over again for it.

"Guys, we need to look tough"

They're nazis & fucking idiots. The tiki torches make it look like they're protesting Karen's decision to include cilantro in the guacamole. pic.twitter.com/UYSpk8PF15

when you have to use a polynesian cultural product (tiki torches) to defend and assert white supremacy ? pic.twitter.com/m8QlStRW0H

They sell those torches at Party City. These dudes probably all went to Party City together. pic.twitter.com/L5nfwpaBkb

Judging by the cloud of citronella off those tiki torches, they've "had it up to here" with the tyranny of bug bites. #Charlottesville pic.twitter.com/olBtpmlBZ7