There’s nothing like staying in on a Friday night with pizza and Netflix. I mean, seriously, what can better than having a whole pie to the face and binge watching The Office for hours on end? I’ll make it easy – nothing is better than that.

But, while you’re trying to figure out what munchies you’re going to shove down your thought tonight, let us help you out: Domino’s just launched their new “chocolate pizza pie,” and it looks like every stoner’s dream come true.

It’s called the Lotta-Chocca Pizza and it’s made with Domino’s signature dough and melted milk chocolate right on top. 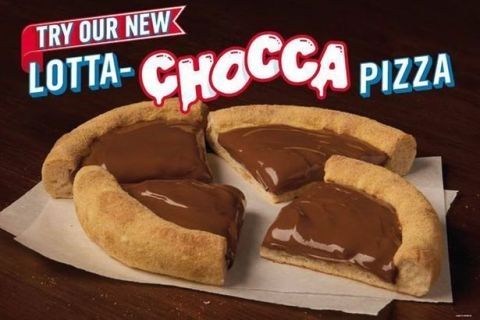 People all over the Internet are losing it over this – because it’s dinner and dessert and a diabetes attack all in one box.

We are currently distracted whilst thinking about the new Domino's chocolate pizza! Hmmmmmmmm pic.twitter.com/6SouIIyBKv

Just had dominos chocolate pizza and I was not disappointed

That is a thing of beauty!!! If I show my kids they'd implode!! Happy tie-less chocolate pizza Friday

I was gonna get a pizza then I saw this. What a time to be alive! Isn't it just warm chocolate on a pizza base? https://t.co/ecpgBXyHEq

Omg we got the @dominos chocolate pizza last night ?? never tasted anything like it!!!! BETTER than the cookies by far