In recent “women are still being treated as objective, sexual objects in 2017” news, I bring you the story of Kate Hannah – a young woman who was just fired from her job because she did not wear a bra to work.

Now, when you hear that someone “did not wear a bra,” and it becomes headline-worthy, you’re thinking that a woman showed up to work in a very inappropriate outfit – a low-cut shirt possibly, exposing too much cleavage for the workplace – violating company dress policy.

Kate showed up to work in a high-neck t-shirt, which, by any policy anywhere, is completely appropriate. 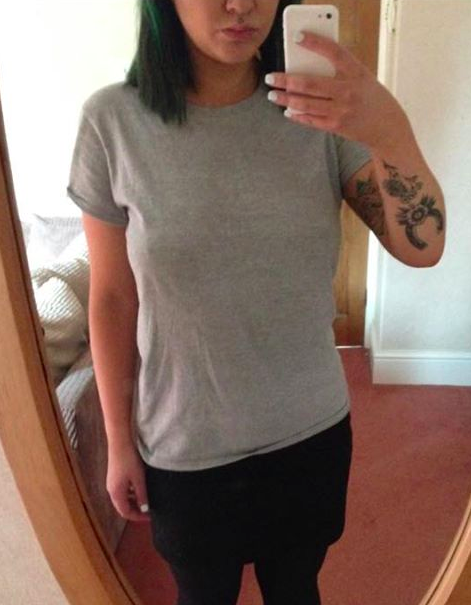 However, according to her Facebook post, she was “fired” because her manager’s brother sexually harassed her for not wearing a bra.

“So I’ve just got home after being sacked from my job, for refusing to wear a bra.

Yesterday an inappropriate sexual remark was made to me, by my managers brother, and in the presence of her. I felt uncomfortable, objectified and shocked that this had happened.

Unfortunately she saw fit to deal with the situation by telling me that I’m not allowed into work in future unless I’m wearing a bra. This was said to me infront of three other staff members and customers. Leaving me feeling body shamed and completely shocked that the blame was being put onto me that I had been sexually harassed at work. She called me stupid, silly and over the top when I told her I was upset.

I am absolutely disgusted, with the unprofessionalism, and blatant lack of respect for my right as a woman to wear whatever makes me personally comfortable.

Nobody should EVER feel the need to hide themselves in order to stay away from unwanted sexual comments/behaviour.

Facebook, of course, has been very supportive of her.

You can read all of the comments here:

All in favor of burning their bras?