Kate is a student at Penn State who’s studying Biobehavioral health. She loves to talk about everything from the art of seduction to microchimerism on Tiktok (@kateao4) which boasts more than 200,000 followers and has over 12 million likes.

Kate noticed that almost many of her videos have comments about her voice. One commenter said, “Pretty informative, but that valley girl voice/inflection had me struggling to keep from not scrolling.”

Kate noticed the only people who seem to have a problem with it are men. The discussion about her voice started after she posted a video about how her professor accused her of plagiarism with no real proof.

Kate’s professor essentially didn’t believe she was capable to turn in a well-written and researched essay because of the apparent “airhead blonde” stereotype he had of her.

The term first originated in Frank Zappa’s 1982 song “Valley Girl.” It can also be found in the following Urban Dictionary entry from 2003. 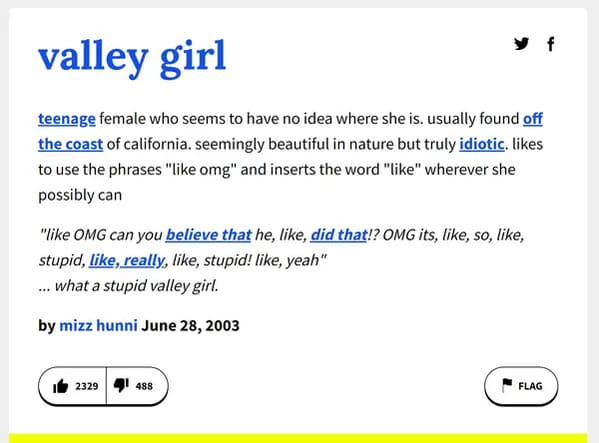 Many women on TikTok defended her while men commented that they also wouldn’t “take her seriously” or “believe” she’s smart because of her Valley Girl speech.

Kate explained in the video that the only evidence of plagiarism he had was that “the scholarship of [her] project [was] well above the level of this class.”

The video gained a lot of attention so she pinned it to the top of her TikTok and added “Elle Woods of Science” to her bio.

Noticing that the only people who seem to be bothered by this are men, she theorized that it’s  because the workforce was male-dominated, hypermasculine speech patterns became standardized as “professional speech.”

As women become more prevalent in the public sphere, their speech patterns are becoming normalized within professional speech, representing the decline of older, male-dominated forms of communication.

She concludes by saying, “[Men are] so lost in the sauce of sexism that they don’t even realize the reason they’re upset about Valley Girl speech isn’t that it’s actually annoying. It’s because it’s associated with young women and femininity, and anything that’s not a patriarchal ideology is going to seem stupid to you.”

Kate also points out in the video that when women have a Valley Girl voice, they’re seen as an airhead. But it’s seen as masculine and unattractive when they have a deeper voice or raspier voice.

She goes on to explain uptalk, which she describes as “a rising intonation at the end of a sentence.” Uptalk is often used by women to indicate that they’re not done speaking while being interrupted.

Kate mentions that men also use uptalk but they aren’t ever chastised for it. She points out that former president George W. Bush can be heard using uptalk in some speeches.

She also mentions in the video that other languages also use uptalks but it isn’t viewed in the same connotation that Americans view it as.

In spite of the negative comments about her voice, “I’m tired of seeing women be made fun of for the way that they talk. I hope viewers take away that their Valley Girl voice in no way takes away from the power of their statements. We don’t have to keep shrinking ourselves to make men more comfortable. Instead of conforming, it’s time that women started punching back.”

Kate’s video struck a chord with TikTokers and receive thousands of comments, commending her for her explanation as well as her voice.