People put money toward a study to find out how boobs affect colds. Yep, you heard right. However, what they found actually turned out to be interesting. Titled “Stereotypical and Actual Associations of Breast Size with Mating-Relevant Traits,” the study was published in the medical journal Archives of Sexual Behavior.

The study focused on 400 women with various breast sizes, who were interviewed on how often they fell ill with a cold or flu over the past three years.

Women with a fuller bust suffer colds for twice as long as those with flatter chests, research has revealed. Those with F-cup sized breasts suffered colds, coughs & flu for an average of 8.3 days compared to women with AA-sized chests who were under the weather for only 3.8 days.

There’s a lot to process here, we know.

I just read that apparently women with bigger breasts suffer with the flu longer than women with smaller breasts. Lmaoo what the heck

During the study, women were dressed lightly and trained researchers took measurements of their bodies. The women also reported what size bra they typically wore. Other info gathered by scientists included “age, height, weight, body mass index (i.e., the weight in kilograms divided by the square of the height in meters, BMI), breast and chest circumference, breast size, characteristics of respiratory and digestive infections (count, average duration, frequency of antibiotic use), sociosexual orientation and its facets, and estradiol and testosterone levels.”

Results showed that women that wear size-F bras or larger fell ill an average of 8.3 days per cold, while women with AA cups had an average of 3.8 days. That’s quite the difference. 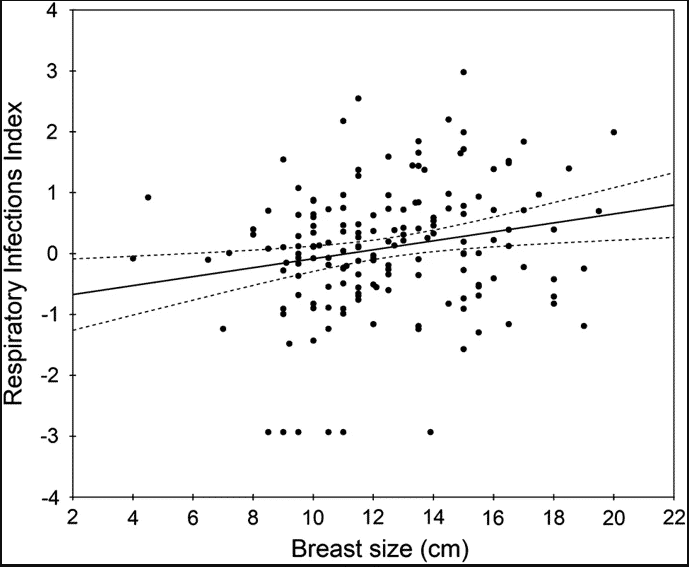 The reason? The more fat cells there are in the breast (specifically leptin, a hormone found in breast fat) the harder it is for the immune system to fight respiratory infections. Leptin also controls hunger signals, energy consumption and a person’s body-fat percentage.

The study also stated “The negative relationships of breast size with infectious health obtained here are also compatible with literature findings that large breasts are associated with higher risk of type 2 diabetes… and breast cancer.”

Naturally, the study didn’t go over well with those who are, *ahem* more “susceptible” to colds.

You’d get your own hospital wing ????

Let this be a reminder to everyone to take your vitamins and get your flu shot.