All’s fair in love and war, so the saying goes. So when parenting blogger Karen Alpert got fed up with her husband lazing around the house, doing nothing while she did all the cleaning, she had no problem getting a little revenge. She sent him out to the store with a shopping list full of fake grocery items and turned her ringer off. Brilliant!

Alpert, who’s better known as Baby Sideburns on Facebook, posted that her husband had spent all morning on the couch. 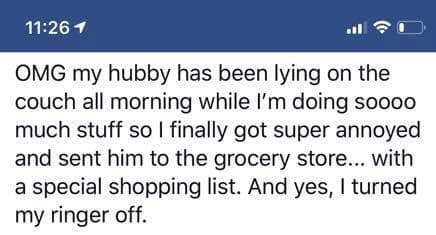 The list was full of things that simply don’t exist. It would be like sending someone out to the woods to bring you back a unicorn. 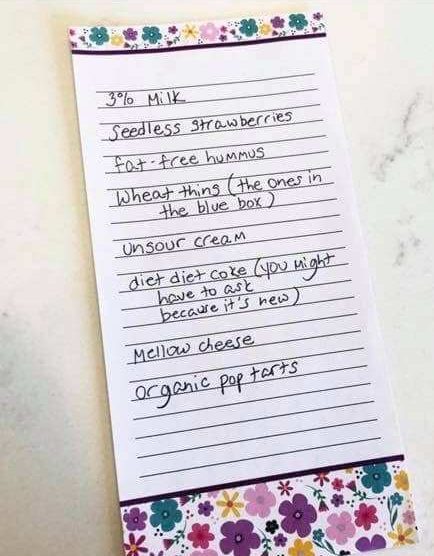 The full list read: “3% milk, seedless strawberries, fat-free hummus, wheat thins (the ones in the blue box), unsour cream, diet diet coke (you might have to ask because it’s new), mellow cheese, and organic pop tarts.”

That man must have been so lost at the store. We have to wonder just how far he made it through the list before realizing that his wife had pranked him.

One person pointed out that it would make a great April Fool’s joke to pull on someone unsuspecting.

Of course, this wouldn’t work for all husbands. In some families, the husband is the one who does the cooking and/or the shopping.

Don’t worry, though—Alpert’s husband is not a constantly lazy bum who never pulls his weight. Alpert writes about him on her blog and has described him on her website as her “very helpful, hot, amazing hubby who I somehow fooled into marrying me.”

Awww. They sound like a great couple. And the prank was perfect.