Incase you’re too young to remember, or you’re not fluent in celebrity news, Chris Brown is a scumbag. I mean – he is an absolute piece of garbage. He dated singer Rihanna before they split in 2009 after he beat the sh*t out of her and, was sentenced to five years probation for the assault. He was also given a restraining order and had to remain at least 50-yards away from the singer – unless they are at a similar event – to which it was 10-yards.

The pictures of Rihanna after the fight went viral online and – for the sake of girl code and humanity – we won’t post them. It’s just wrong.

Why am I bringing up this assault from 2009? Well – Chris Brown has decided that it’s a great idea to comment on a picture on Rihanna’s Instagram – and, we’re crowning him 2017’s World’s Thirstiest Man.

Rihanna has been looking incredible lately. She’s put on some weight, but, she looks flawless as she’s embraced her curves and – everyone has noticed. She posted a photo on her Instagram page from her annual trip to Barbados for the country’s Crop Over Festival.

You have to admit – she looks incredible. But, lets be honest, when doesn’t Rihanna look incredible? 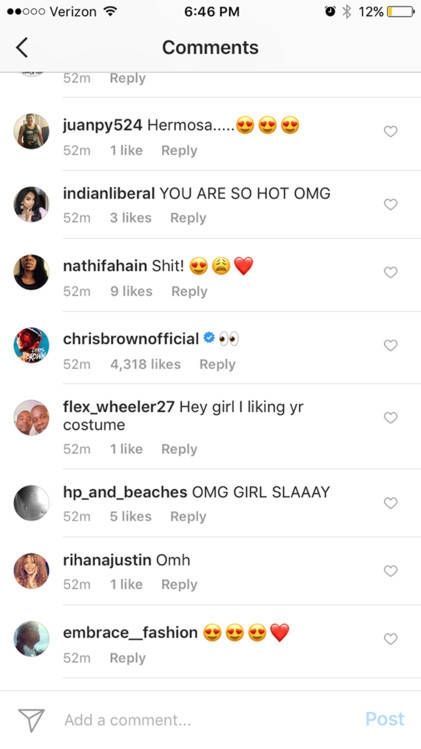 Is that what I think it is?

ARE YOU F*CKING KIDDING ME?!?

How dare Chris Brown have the balls to comment with some side-eyes at Rihanna after he literally beat the sh*t out of her. Who does he think he is? Someone get this entitled a**hole a reality check. I’m heated. I am NOT having this. And, neither is Twitter.

Chris Brown had the audacity to comment "?" under Rihanna's picture. Imagine being that bold.

We gotta defend Rihanna at all costs pic.twitter.com/8hChvnSqtC

Chris Brown need to take his eyes all the way out of here. My boo rihanna don't want none! pic.twitter.com/jzVyWj235t

Chris Brown really comments eyes and shit when he sees pictures of Rihanna like he didn't beat the shit out of her. He's so trash.

Really Chris Brown ???? You gon comment under Rihanna's picture ?? Right in front of my salad ?? pic.twitter.com/Vr3sokIIgR

chris brown is an obsessive and abusive disgusting man who rihanna has absolutely no interest in, he's fucking psychotic

Can we all give a collective "BOIII WTF U THINKIN" to Chris Brown's comment on Rihanna's insta???? pic.twitter.com/GoFkQLoAWS